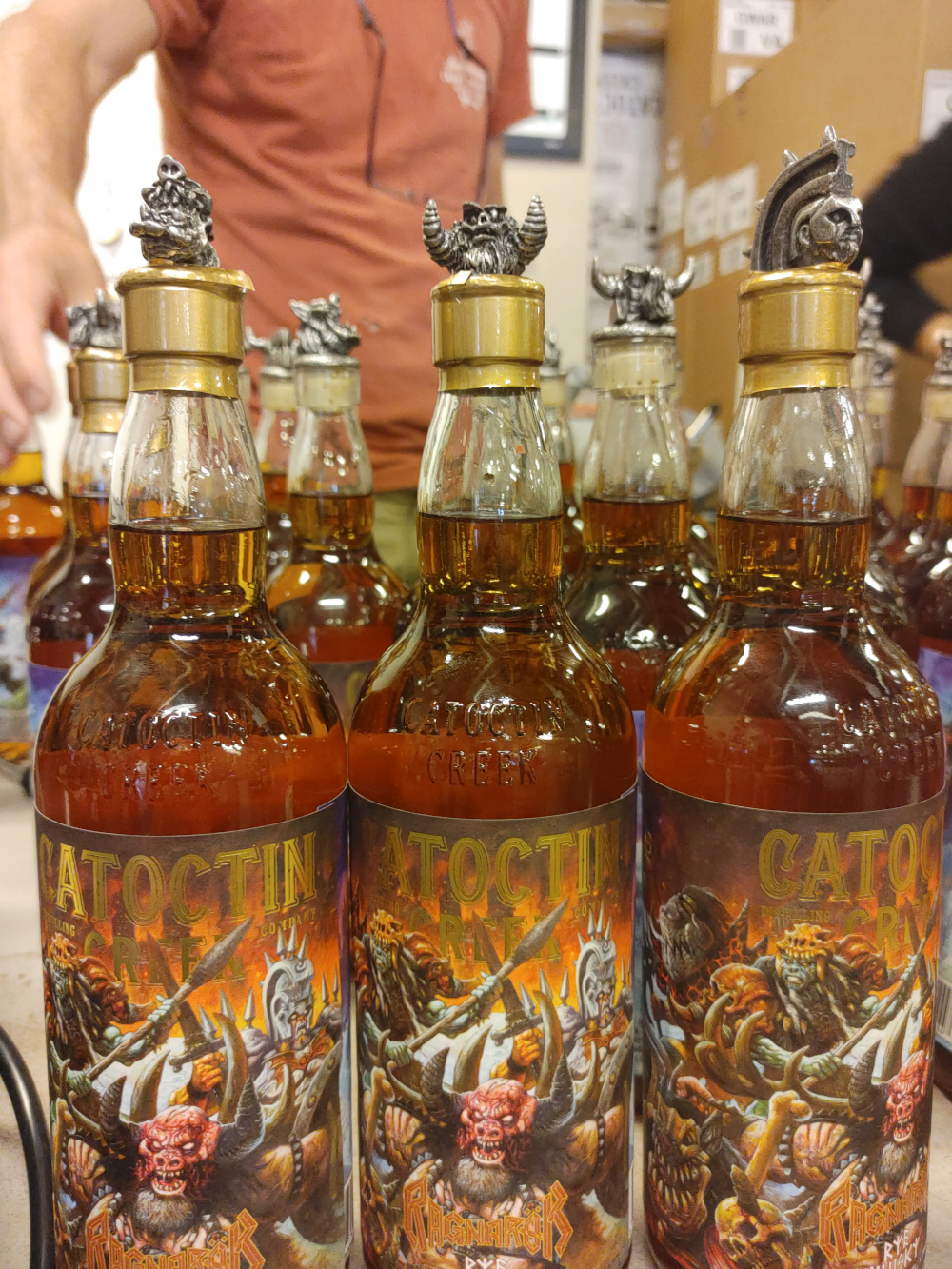 A Brief History of Time...

Eons ago the members of the intergalactic shock rock band known as GWAR descended on this world as passengers on a flaming comet that would bring about the destruction of most life on Earth. The asteroid plowed into the continent of Antarctica with devastating force, melting the ice, setting much of the world ablaze, and leaving a massive crater filled with the purest Antarctic water and a strangely intoxicating ichor that flowed from the veins of the immortal GWAR. Legend recorded these events as the tale of Ragnarök, the end of days. But like all endings, it was also a beginning. Now, this blood of the gods, harvested from the great caldera, has been distilled and bottled by Catoctin Creek as Ragnarök Rye.

“Ahh, such a powerful spirit,” said The Berserker Blothar of GWAR. “A delicious sacrament to drink in preparation for battle, and it’ll get you really, really crazy.”

The mad scientists at Catoctin Creek conducted experiments on aging the blood of GWAR in barrels made from the different types of wood scorched by the comet's blast. They used the rarest of grains and watered their mash bill with the melted Antarctic ice to create a 92 strength rye whisky, pot stilled and then aged in charred new white oak. Members of GWAR then hurled the whiskey barrels into the orbit of the moon, causing contraction to take place as the barrels spun under the influence of the deathly coldness of space and the life-giving heat of the sun. The end result was Ragnarök Rye, an exquisite beverage graced with notes of cherrywood and sugar maple to produce subtle flavors unheard of in a traditional rye whisky.

Once again, Catoctin Creek has been awarded #1 BEST OF VIRGINIA for Distillery in Northern Virginia in Virginia Living magazine! Nestled* on the banks of its namesake creek, Catoctin opening in 2009 as the first legal distillery in Loudoun County since...

Maggie Kimberl of American Whiskey magazine recently caught up with Becky Harris for an update on the distillery: MK: Catoctin Creek whiskeys have garnered some major accolades over the years. What are you most proud of? RH: This is a really challenging...

Nice to see Becky included in The Spirits Business roundup of ten female-founded spirits brands on International Women's Day. Becky Harris co-founded Catoctin Creek Distilling Company in Virginia with her husband Scott in 2009. Based in Loudoun County in the north...

JUN 18   Bottling Workshop 10:00am—12:00pm Catoctin Creek Distilling Company will conduct one of our famous Bottling Workshops!  Here's your chance to volunteer and learn how to bottle, cap, seal, and label Roundstone Rye. Get...

Jazz at the Distillery - The Eric Byrd Trio

JUN 25   Jazz at the Distillery - The Eric Byrd Trio 7:00pm—9:00pm Join us for an intimate evening enjoying jazz at the distillery.  Performing this month is the world-renowned Eric Byrd Trio. For over...