We received some more press on the trade tariffs, this time from France's TF1 television station.  Translating the summary of the article, to English, and the original French:

When Donald Trump's policy penalizes American companies
Donald Trump has upset the rules of world trade in recent months, like the customs duties of 25% introduced on some European products. This policy was very popular in the United States, initially. However, it is starting to have negative consequences for some American companies. A crankback that concerns even everyday consumers. This topic was broadcast in the news broadcast of 20H of 03/11/2018 presented by Anne-Claire Coudray on TF1. You will find in the program of the 20H news of November 3, 2018 reports on current political economic, international and cultural, analysis and rebound on the main topics of the day, topics in the regions and surveys on topics that concern the daily French.

Modern Bar Cart Podcast - The Battle of the Bartenders

We had a lovely event last month, The Battle of the Bartenders, where some of Loudoun County's top mixologists came together to sling cocktails and compete to see who had the best drinks.  Proceeds went to support CORE (Children of Restaurant Employees), who support those in our industry in need.  It was a great wild evening, and definitely for a great cause.

Eric Kozlik reviewed the evening in his Modern Bar Cart podcast. You can listen to the full episode, here, or go over to his site and subscribe, here.

Our founder, Scott Harris, headed up to Frederick this week to chat with the guys at the Uncapped podcast.  After nearly ten years in business, Scott reflects on how they got started, the financial, competitive, and legal environments then and now, and reviews some of the recent awards from the New York competition.

You can listen to the podcast, here, or head over to their site and subscribe, here. 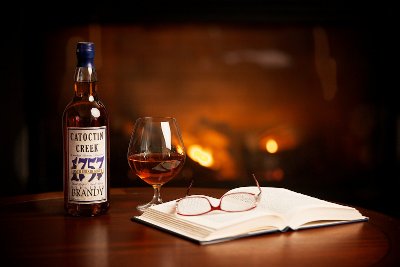 Catoctin Creek was named #3 in USA Today's "10 Best" awards, in the category of "Best Brandy".

While Catoctin Creek might be best known for its flagship rye whiskey, the Virginia distillery also makes the state’s first commercial grape brandy since the founding of the Commonwealth. This 1757 Virginia Brandy, made from locally grown wine grapes, is aged in French oak barrels for at least two years.

You can read the full article, here. 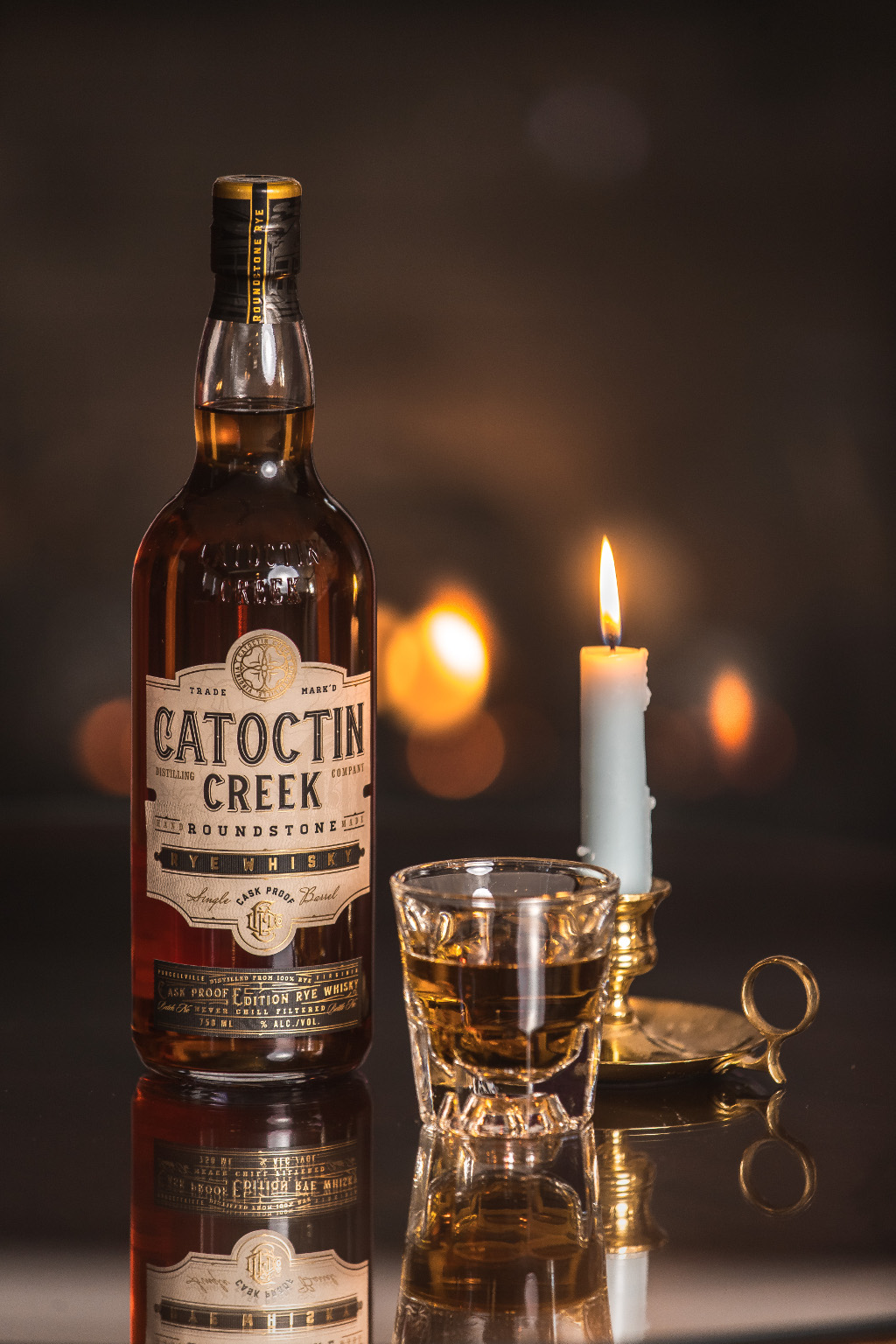 We were thrilled to meet Mark Gillespie, the personality behind WhiskyCast, a very popular national podcast on (you guessed it) whisky.  Mark tasted, among other products in our line, our Catoctin Creek Roundstone Rye Cask Proof.  We think he liked it:

93 points.  This rye whiskey from Virginia’s Catoctin Creek Distillery is often hard to find, but well worth the effort. The nose has soft spices and touches of toffee, vanilla, honey, and charred oak. The taste starts off with dark fruity notes of raisins and plums, followed by spicy notes of clove, allspice, and a hint of coriander while toffee, vanilla, and caramel notes add balance in the background. The finish is very long and rich with lingering spices and a hint of honey. This is cask-strength rye whiskey that doesn’t taste like it’s cask-strength! Excellent!

Louisville Business First did a story on our launch into Kentucky last week.  David Mann writes:

[Scott] and his wife, Becky Harris, started a rye whiskey distillery, Catoctin Creek Distillery, in Purcellville, Va., in 2009 — just before the spicy whiskey drink catapulted to a ubiquitous offering at bars and liquor stores everywhere.

Catoctin Creek has been nominated in USA Today's "10 Best" awards, in the category of "Best Brandy".  Please go to the link below and VOTE for us every day!  From the article:

While Catoctin Creek might be best known for its flagship rye whiskey, the Virginia distillery also makes the state’s first commercial grape brandy since the founding of the Commonwealth. This 1757 Virginia Brandy, made from locally grown wine grapes, is aged in French oak barrels for at least two years.

Becky Harris was featured today on Great Day Live! on WHAS TV in Louisville, Kentucky.  This week, we're launching Catoctin Creek into the Kentucky market, and today's show was celebrating that launch, and featuring our distiller dinner tonight at Decca restaurant.  You can watch the full video, here.

Inside Loudoun visits the distillery

We had the pleasure of hosting Inside Loudoun at our distillery last month.  They had a great time sampling our seasonal cocktails, and visiting with Denise, our tasting room manager:

Sipping the spirits at Catoctin Creek is part of the experience. Visitors can make reservations (necessary on weekends) to try flights of their Roundstone Rye, Watershed Gin and brandies straight, or make choose to enjoy them mixed into incredibly creative cocktails by bartender brainiac, Denise Petty. Every recipe from the monthly changing drink menu captures the season and features locally-sourced juices, syrups and bitters.

You can read the full story, here, or watch the video above.

One Nation Under Whisky Podcast

We were absolutely delighted to be part of the One Nation Under Whisky podcast.  If you're a whisky nerd, who wishes to know all the details, this is a fun, clever, and not-taking-itself-too-seriously podcast. Love, love, love it!

Give it a listen, here.

While President Trump and EU chair Junkers met to begin the process of negotiating the tariffs, Catoctin Creek received more press coverage as an unintended victim on the ongoing trade war.  Both BBC (UK) and ARD (Germany) have stories on the issue, featuring out distillery:

From the BBC article, "Now in the craft distilling industry [in the United States], we have small distillers like ourselves in all fifty states," says Scott Harris, founder of Catoctin Creek.  "If these trade negotiations go on for many months, or a year or more, then we're really going to have to re-evaluate our European strategy. and it means we may have to pull back from Europe for a while."

From the ARD article, "The difficult thing about being in the whisky business," says Mr. Harris, "is, you know, we've laid down whisky years ago in anticipation for markets for today."

Here are links to the various web, radio, and TV spots:

The BBC audio was also picked up by American Public Radio, which ran it on the Marketplace Morning Report:

Senator Tim Kaine (D-VA) highlighted our company as an example of how the trade tariffs are hurting US small businesses, particularly manufacturing and agriculture jobs.  From their press release:

WASHINGTON, D.C. – Today, U.S. Senator Tim Kaine, a member of the Senate Foreign Relations Committee, pressed a Trump Administration official on President Trump’s trade war and the concerns he’s heard from Virginia farmers and business owners about the negative effect it is having on their business. In a Committee hearing on tariffs, Kaine, with a bottle Catoctin Creek Whiskey from Purcellville, VA in hand, told the success story of the Loudoun County company’s expansion and how that is now at risk because of the trade war that the Trump Administration has created with our allies.

You can watch the full video, here.

American Whiskey magazine does an interview with Becky Harris, our president and chief distiller, about starting up a distillery and what's on the horizon. Focusing more now on the spirit itself...

FEB 29   Rabble Rouser in ABC Lottery 9:00am Leap Day is Lottery Day!  On February 29, at 9am, the Virginia ABC lottery opens for Rabble Rouser!  Miss your chance to get a bottle at...

MAR 14   Bottling Workshop 10:00am—12:00pm Catoctin Creek Distilling Company will conduct one of our famous Bottling Workshops!  Here's your chance to volunteer and learn how to bottle, cap, seal, and label Roundstone Rye. Get...