Nevin Martell does a nice little feature piece on Catoctin Creek in the Capitol File magazine.  Funny too, because the photo shows Becky and I doing "distillery stuff".  In this case, we're filling a barrel (with water for the photos), neverminding that we (a) never fill barrels by hand, and (b) would never do so in our fine church-clothes frippery.  No matter, the article is fun and informative!  Nevin writes:

The duo loves collaborating, working with nearby vintners and orchardists to source wine grapes, pears, peaches, and apples for their limited-edition brandies. But the core of their business focuses on producing their three kosher, certified-eco-ganic signature sippers: Roundstone rye whiskey; Watershed gin; and Mosby’s Spirit, an unaged white whiskey.

Alex Benedetto and Jean Schindler, both of Cloture Club, were among the lucky DC area food press that were invited for a private weekend tour of Loudoun County, hosted by yours truly.  We wined 'em, we dined 'em, we fed 'em, and we toured 'em.  Mostly we were just bragging... bragging about the bounteous and beautiful county in which we live.  They were suitably impressed:

While this was obviously an amazing foodie weekend, even more inspiring was the collaboration between the many business owners we met. DC may have a dynamic restaurant scene, but Loudoun County’s story is far more intricate -- and sustainable. Let’s just say that Loudoun has arrived on the foodie map.

Read the full story here.  For Jean Schindler's lovely photos, check the Flickr set here.  A nd here are the links to our wonderful partners for the weekend: 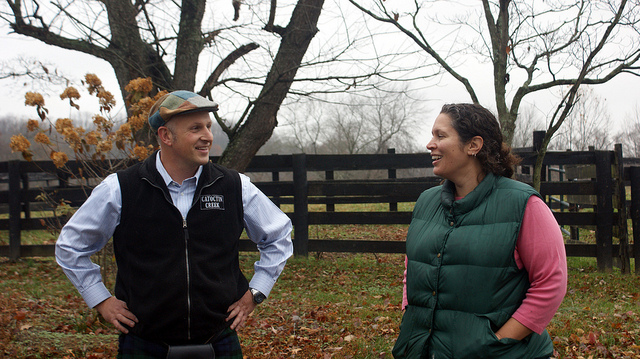 There is a smell and a taste to the air in a distillery, of smoke, farmer’s grain and something akin to molasses, plus the yeasty sourness of beer and the nuttiness of toasted barley, and the richness of whiskey breathing in and out of oak.

It’s a Virginia tradition, whiskey. George Washington and Thomas Jefferson made it, and sipped it on their verandas as they helped shape the New World. James Madison was known to down a pint a day, and the average colonist consumed 5 gallons of spirits a year. Lest that sound shocking, that’s about 1½ drinks a day. Not healthy, perhaps, but not enough to leave them incoherent and stumbling, either.

Slingin' Cocktails on Foodie and the Beast

Scott and Emily were invited back to appear on Foodie and the Beast on Federal News Radio:

From fine dining to irresistible junk foods, top chefs to up-and-comers you haven't heard of (yet!), foie gras, fish fingers, and much more, no sip of wine, no morsel of food or food gossip goes untouched, as David and Nycci Nellis give you the inside dish on the hottest restaurants and bistros, the freshest ingredients and the finest tipples on the scene.

Other guests for the hour were Capital Kambucha, Union Kitchen, and Farmland Feast.

It was a great show! You can hear the show on their site, here, or download the podcast, here.

Michaeleen Doucleff of NPR did an interesting story on the differences, chemically, between rye and bourbon.  Interestingly, the researcher found that the distillery itself had more of a 'fingerprint' on the whiskey than the actual grain mashbill.

Then, later in the article, I am quoted talking about the differences in the grains when 100% ryes are compared against 100% bourbons.  My only regret is the misquote...

The corrected sentence should read, "The vast majority of Tennessee [whisky AND] bourbon and rye on the market are some mixture of rye and corn together." (My additions in bold.)

Regardless, it is a great story, and well worth reading.  Funny also to note that the researcher is named "Tom Collins."  You can't make this stuff up!

Local Distillery Drinks in the Sun

Neal Augenstein, reporting for WTOP, gives a nice overview of our new solar array at the distillery:

Stills in Catoctin Creek Distillery, in Purcellville, Va. (Courtesy Scott Harris) Outfitting the new technology for the mostly brick building, that was originally a Buick dealership and later a furniture factory, did pose challenges.

"We had to make sure the wooden frame roof was sound," says Harris. "Some of the struts and rafters were not up to code for the weight of the new system on the roof, so we had to replace those with some steel I-beams."

Read the entire story, here, and listen to the podcast, here.

L'Chaim in the Washington Jewish Week

A while back, we performed a tasting at a big synagogue in Potomac, Maryland.  Joshua E. London and Lou Marmon were on hand to interview us, and also provided a review of the Roundstone Rye.

One day a few years back, Scott Harris — founder and general manager of Catoctin Creek Distilling Co. in Loudon County — was sitting at his desk at one of the various Washington, D.C., defense contractors when he had an epiphany. As he puts it, “I was working on the 30th revision of a Powerpoint package which I knew nobody would ever read. I said to myself, ‘There has to be something more to life than this.’ ”

So after 20 years building a software career in telecommunication systems and government IT solutions, Harris wanted something more rewarding. “At that moment,” he says, “I was swept back to a quarter century earlier, when I was a 15-year-old intern working in a winery. That was a job that I really enjoyed — the satisfaction of working with my hands, producing something, and having people appreciate what I had produced. It was this kind of job that I now felt myself seeking. But this time, I thought, I’d focus on spirits. I wanted to start a distillery.”

Excitement is building as we approach the opening of our new building on Main Street.  Margaret Morton, of Leesburg Today, covers the story of the new building, how we obtained it, what we're doing to it, and when we expect to open:

As with any old building—and the exact age of the structure is difficult to assess—discoveries abound, as additions and deletions that had been covered up over the years revealed both answers and more mysteries. “Every time we discover something new, it sets up a further question,” Scott said.

One of the best things about an old warehouse-style building—and the bulk of the structure—is that it is relatively easy to adapt to a new use. After removing the plywood and taking in the dimensions of the large space, crews cut the floor apart to lay in new plumbing, including cast iron sewer pipes for longevity. A sluice, similar to what once was common in dairy barns, runs through the middle of the production area, so the floor can be hosed down at the end of the day’s production.

Blending the Past & Present: A New Home for Catoctin Creek Distilling Company

On Tap Magazine published a story about our transition from our industrial warehouse space to our new historic home on Main Street in Old Town Purcellville.  Michael McCarthy writes:

Soon it became clear that from both a production and marketing perspective it was time for a move. Like the spirits they craft, Scott and Becky were looking for a perfect blend of old and new in potential locations. They found just such a thing in the Case Building on Main Street in downtown Purcellville. The building, built around 1890 by Samuel Case, was home to the Case Motor Company in 1920 – the year Prohibition took effect, and had been in the Case family until Scott and Becky purchased it in 2013.

The move to Main Street feels like a step back in time and a journey to “Mayberry” USA. The street is home to many buildings that date back as far as 1850, 1880 or 1890 and despite booming development on the outskirts, Main Street has retained the charm of years past.

S.D. Peters of The Whisky Reviewer grabbed a bottle of Roundstone Rye at his local liquor store and wrote up the following review.  I think he nailed it:

It’s not only a unique Rye, but a unique entry in the exclusive class of 100% Ryes. It’s the least Rye-like 100% Rye I’ve had, yet still very much a Rye of the New Breed, having a particularly characteristic sweetness I’ve detected in other craft Ryes. Lacking a decent metaphor, I’ll go with a simile: it’s like peppering a piece of fruit.

What really makes this Rye distinctive is a subtlety throughout. While it suggests a commanding sweetness, the spicy undertones of Rye remain until the finish, tempering the sweet so it’s less like candy, and more like a rich, eco-ganic fresh fruit.

On a grading system, we rated a "B+", which puts us below the "Masterpiece" class of "A" and "A+" whiskies, but above the best of the mass market stuff.  "Very good stuff."  We're happy with that!  Thanks, S.D.!

Nevin Martell does a piece on the various distillery tours in the greater Washington DC area.  Nice coverage for us!

"This hour long tour involves learning and liquid appreciation.  Guests at the eco-ganic and kosher distillery begin by seeing and sniffing every step of the whiskey-making process.  The guide may open one of the fermenters for a peek.  'The grain looks like oatmeal and smells like beer,' Harris says. 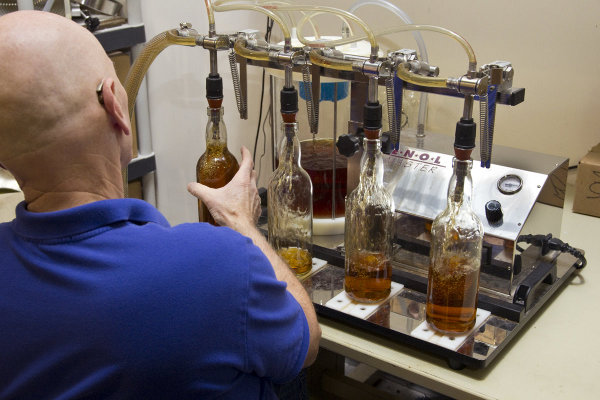 Kris explores the distillery process, from grain to glass.  Here she is talking about the bottling operation:

The staff likes to call the distillery's Enolmaster bottling machine 'the whisky cow.' The hand-operated system fills four bottles at once.  "We usually have a group of volunteers that come in and help us bottle," Harris says.